I woke up today feeling better and so was Ellen. We planned on going to the War Museum. They said it takes about 30 minutes walk from our hostel. We had lunch first then started walking. Since the War Museum will not open again until 1:30PM, we decided to go to Independence Palace which is just nearby.

On our way to the palace seeing all the crazy traffic, I told Ellen I have been wanting to have a picture with a lot of motorbikes in the background and here she captured one for me when we got the opportunity.

Then we saw this coconut vendor who asked Ellen to carry his “whatever you call it”. Ellen asked me to do the same. Pretty fun but it was heavy and we didn’t want his coconut anyway so we kept going. 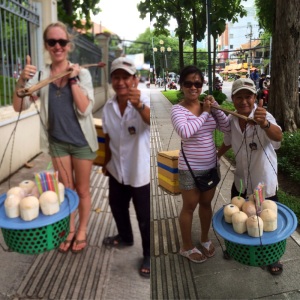 When the security guard in front of the palace saw us, one guy immediately offered to take a picture of us which was nice. 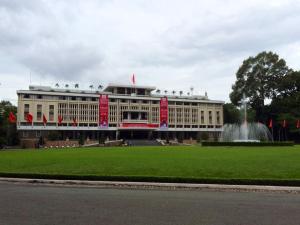 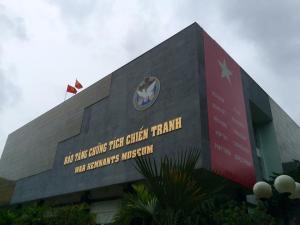 This museum is all about the Vietnam War against America. We started on the ground floor. This first part gave me goose bumps the most. Although, the whole thing was crazy! It was unbelievable and it was hard to understand why this war even had to take place. It was so overwhelming though to know how many countries supported Vietnam during the war.

I saw this wall so I decided to write and I really meant what I posted here.

I think we spent at least 2 hours in the War Museum. It was a very interesting experience. Definitely worth the time and money.

We were hungry so we decided to go to the food court in Diamond Plaza. We had such a good lunch.

Across the street is this beautiful cathedral called Saigon Notre-Dame Basilica.

We were walking from 11AM to 6PM. When we finally got back in the hostel, we rested for few minutes then we went to get smoothie and of course I got mango. I just gotta have it before the day ends! 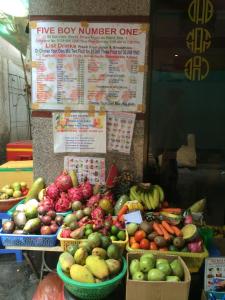